Twists and turns, highs and lows, dramatic reveals—Fixer Upper fans have seen it all (on Chip’s head).

The last four years have been a wild ride for the Gaines family. Magnolia Realty has grown into an empire, Fixer Upper has grown into must-see TV, and Chip’s hair has—but let’s not get ahead of ourselves. We’ll give those tresses the walk down memory lane they so richly deserve. 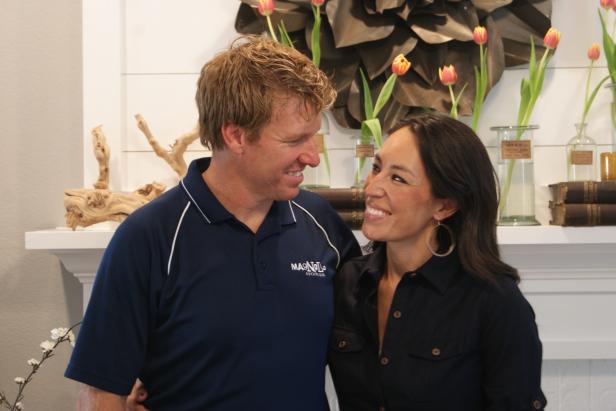 Lewis and Clark led the first American expedition to cross the continent and explore what is now the western United States. Their awe as they forged across the land, every horizon new and strange...was not unlike the way we met Chip’s ‘do. Such uncultivated potential! Consider this its natural state, and imagine the adventures to come. 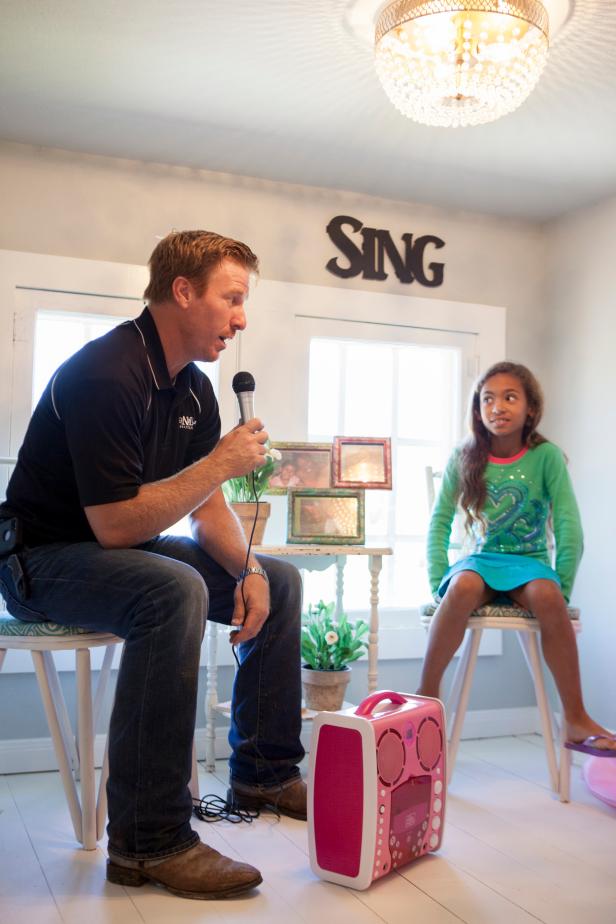 Host Chip Gaines shows Charmaine and Chuck’s daughter Charlie how her new karaoke machine works by singing Charlie a love song. Charlie is not impressed with Chip’s singing, but she is excited her new room on the third floor, complete with a stage, a reading nook, a desk for doing homework, and a table and chairs. Hosts Chip and Joanna also made a custom dollhouse for Charlie, as seen on HGTV’s Fixer Upper. (action-reveal)

Crooning and grooming go hand in hand, and Chip’s head suit underwent its first set of alterations for his debut at the karaoke machine. Charlie, his clients’ young daughter, seemed less than convinced by his love song, but we’re confident she would have preferred this Sinatra-like clip to the grunge-rock locks he sported an episode ago. 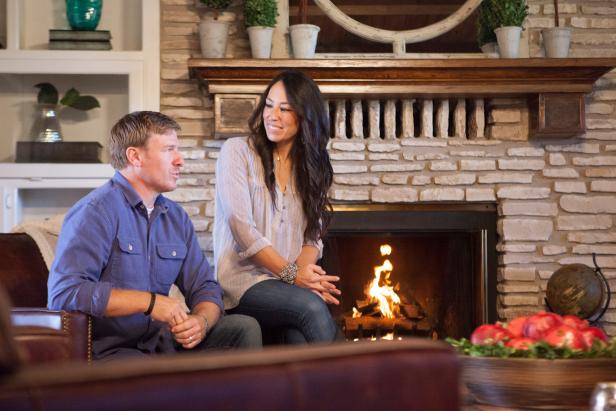 Fixer Upper Hosts Joanna and Chip Gaines in the living room of the Jonklaas home, as seen on HGTV's FIxer Upper. (action)

Chip, for one, knows the clean look is working for him—check out those assertive lines, and that gaze. Derek Zoolander would be proud. 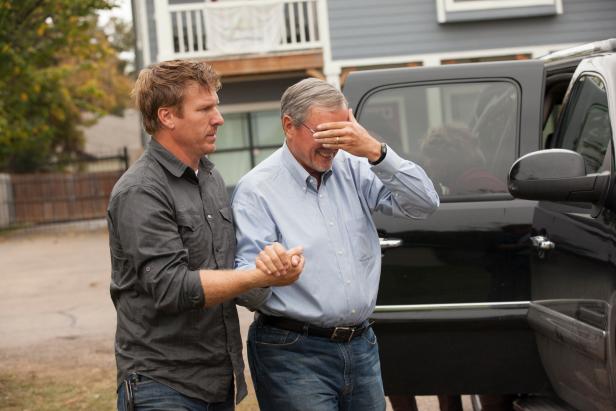 Common sense tells us that this good-natured missionary is covering his eyes in anticipation of a first peek at his newly-renovated home, but is he aware of—and prepared for—the structural changes afoot right beside him? Grip that hand tightly, sir. The hair is escaping the shackles of civilization once again. 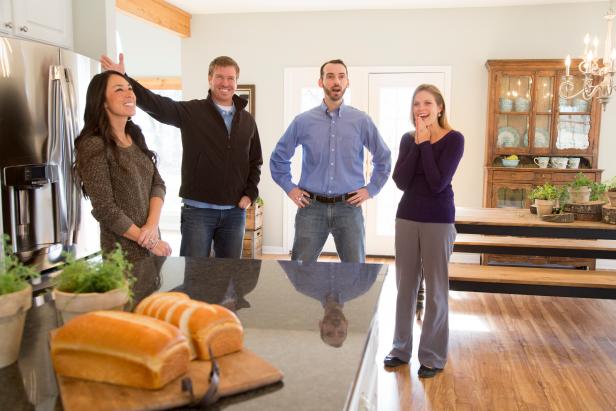 Fixer Upper Hosts Chip and Joanna Gaines give Rebecca and Joel Mahan a tour of their new kitchen, as seen on HGTV's Fixer Upper. (action)

This is what we in the business call foreshadowing. 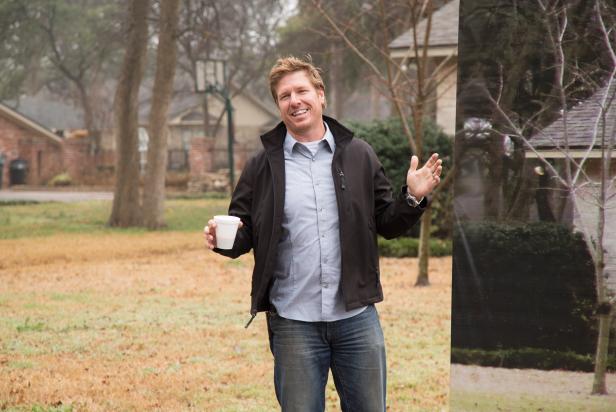 Personality and Behind the Scenes, as seen on HGTV's Fixer Upper.

Is it actually windy? Does it matter? Chip and Jo’s clients are getting back to their Texas roots after a sojourn in Oklahoma and looking for a home with local flair that’s informal, but not too “buckaroo.” For his part, Chip is ready to roll with the tumblin’ tumbleweeds. 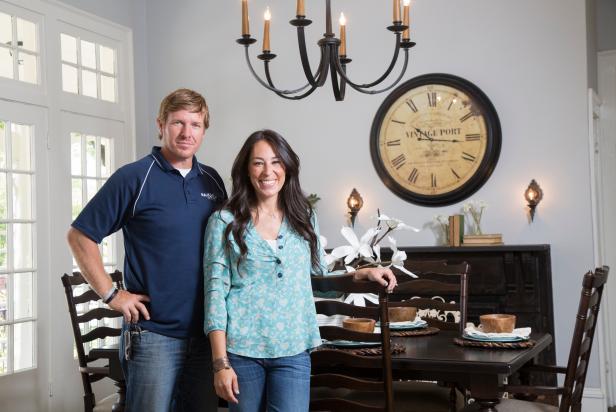 Portrait of Hosts Chip and Joanna Gaines in the dining room at the Hendricks' home, that they've just renovated, as seen on HGTV's Fixer Upper. (camera aware)

What time is it? Time for Chip’s bangs to begin their takeover. Buckle up, friends. 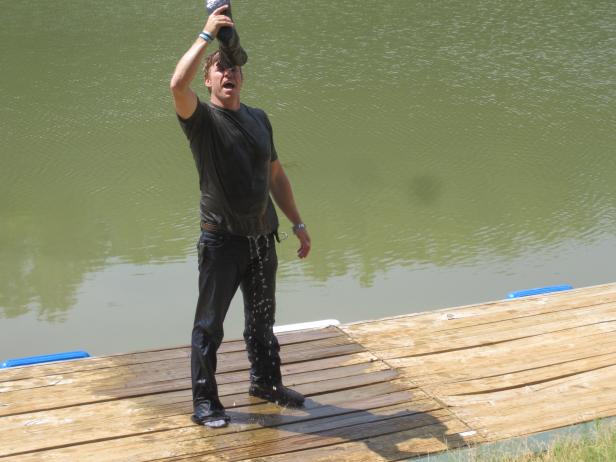 In Season 2, Fixer Upper viewers got a sense of how the BBC’s Jane Austen fans must have felt when Colin Firth took his famous dip in Pride and Prejudice. No? Okay, they got a bit of background on how Chip gets his hair just so. The secret ingredient: “Boot juice.” 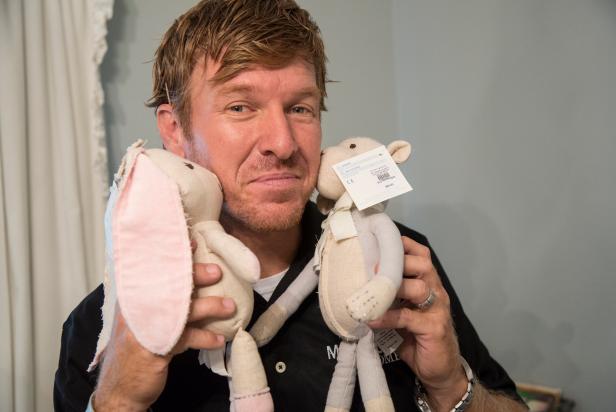 Chip went a little heavy on the boot juice in Season 2. 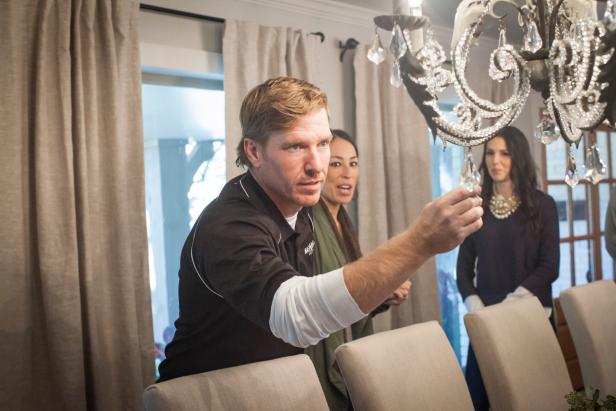 Jo’s ostensibly checking out a fancy new light fixture here, but there are some proto-mullet festivities going on behind Chip’s ears, and we all know it. Soon enough, he’s gonna swing from the chandelier (from the chandeli-e-e-er). (Please don’t tell Chip how Sia wears her hair.) 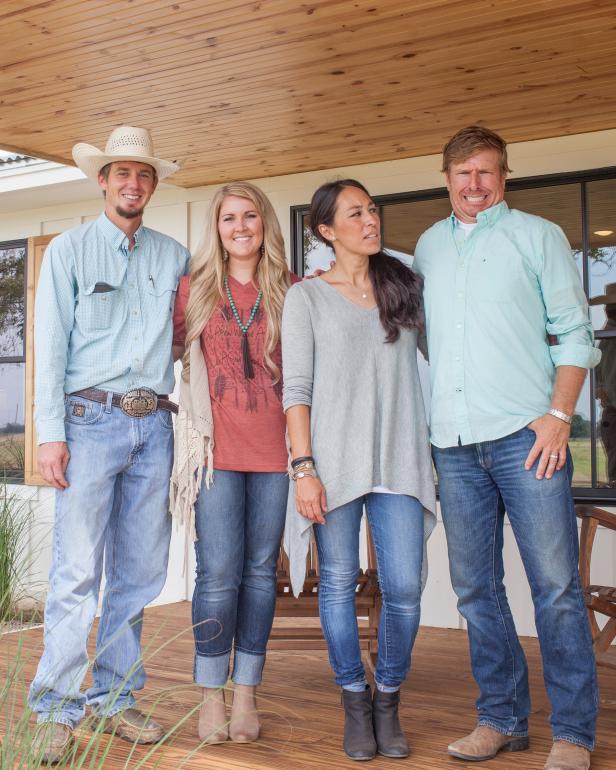 The Zan family on the porch of their newly remodeled house with hosts Chip and Joanna Gaines, as seen on Fixer Upper.

Chip saluted his rancher clients’ livelihood by coiffing himself like a longhorn steer. Thoughtful, no? 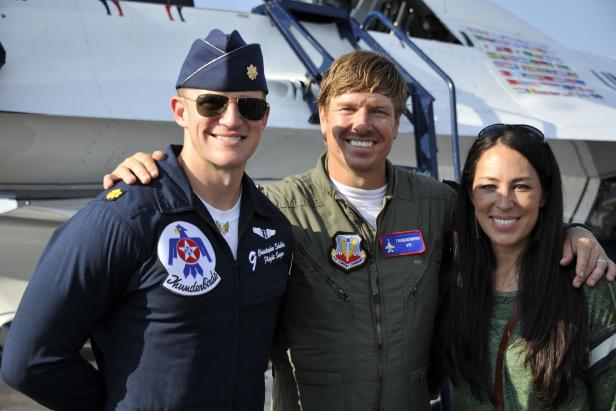 Chip took an honorary flight with the U.S. Air Force Thunderbirds after Waco named him its Hometown Hero. Ever a proponent of safety and proper equipment, he prepared a dense, protective layer of bangs for the occasion. And...a mustache? How much of that five o'clock shadow is actually shadow? 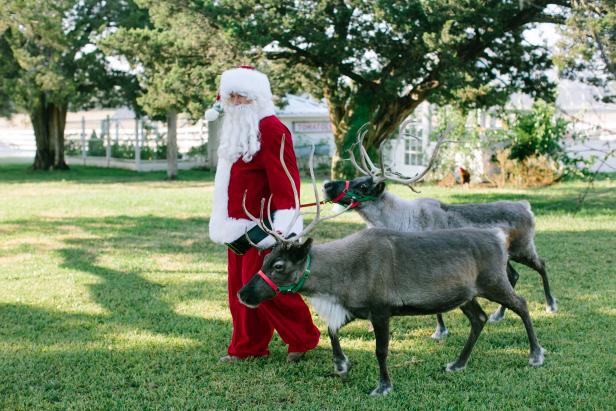 Host Chip Gaines suprises the kids with a reindeer visit at Magnolia Farms, as seen on Fixer Upper.

This is what we in the business call foreshadowing. 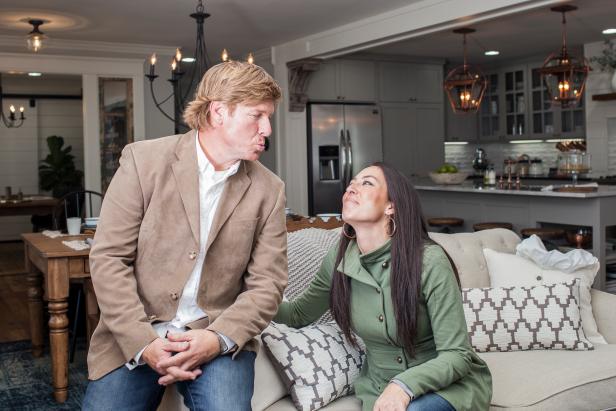 Chip and Joanna Gaines in the Ward's newly remodeled living room, as seen on Fixer Upper. (After)

Season 4, Episode 3: Kicking It Up a Notch 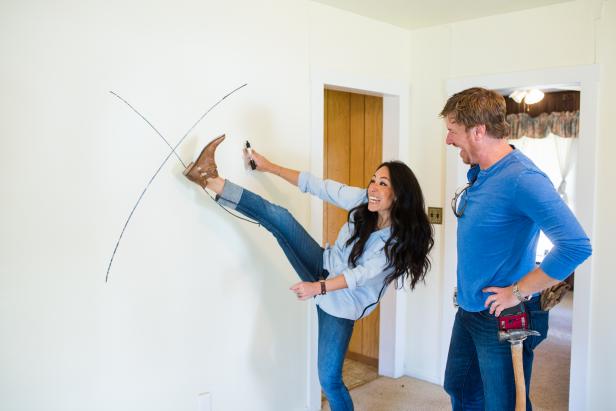 Hosts Chip and Joanna Gaines mark which walls are going to be torn down in the Eberle home, as seen on Fixer Upper. (working)

Beginnings of a beard: Check. Industrial-strength sideburns: Check. Joanna knows the beginning of a big change when she sees it: New Chip is on the other side of this wall, and the wall is coming down.

In what one might call a manscaping cliffhanger, Chip's chin-tufts celebrated the end of Fixer Upper's fourth season by laying claim to his face, prompting one Instagrammer to compare him to Chuck Norris. Will the takeover continue over the summer? We know that, like Chuck Norris himself, Chip's look doesn't sleep: It waits.

Joanna: “How can we make a splash when we appear on the TODAY show to talk about the new book?

This is a man who loves his look, and we have a feeling he won’t be shaking the Wooly Willy board for a while. Then again, we’re talking about Chip Gaines: Who knows what’s in store on this season of Fixer Upper? Pull up a (barbershop) chair: New episodes kick off Nov. 28 and 9|8c. 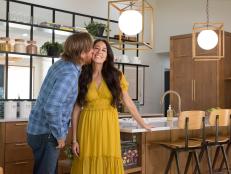 Chip and Joanna Gaines are Pregnant!

The Fixer Upper stars announced they're expecting their fifth child later this year. 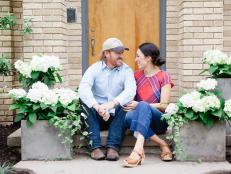 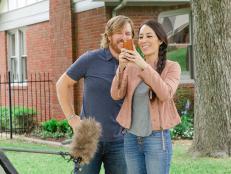 Chip Gaines Has Thrown Down a Challenge, and This Time His Hair Is On the Line

Operation Haircut: It may be time for a trim for Mr. Gaines but, in this case, there could be a big payoff benefiting a worthy cause. 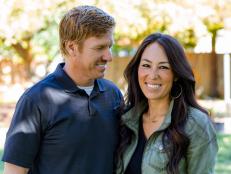 7 Things You Never Knew About Chip and Joanna Gaines

After spending a day with the Fixer Upper hosts, Sara Peterson — HGTV Magazine's Editor in Chief — is sharing everything she learned about the dynamic design duo.

What We've Learned about Marriage from Chip and Joanna Gaines

Fixer Upper's dynamic duo go all in on every one of their projects. Our hands-down favorite: The rock-solid foundation of their relationship. 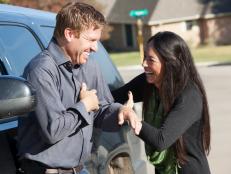 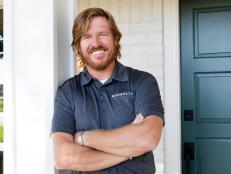 He said he would, and then he did. Chip cuts off his hair (all of it!), and for the best of reasons. 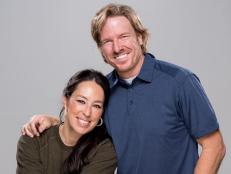 Just announced! Discovery Inc. and Magnolia, the home and lifestyle brand led by Chip and Joanna Gaines, are teaming up to launch a multiplatform media company that will include a new television network as well as a 'TV Everywhere' app and more. 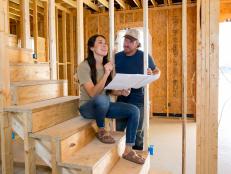 A 'Fixer Upper' Timeline: From Waco to Worldwide Sensations

In the early aughts, a pair of young Baylor grads decided to spend their lives together. In 2018, everyone knows their names.

Buy It or Build It

Buy It or Build It