Debbie and Sean have been living with their respective families near Boston, MA. Ready to strike out on their own, they are looking to buy their first house together. Debbie, a real estate agent, is set on finding a Cape Cod style home that she can overhaul. Sean, however, prefers a more rustic look; he's also wary of undertaking too many renovations. Debbie finds them several places to look at, but agreeing on one proves to be a challenge. Once they do, work gets underway and quickly takes on a life of its own. What starts out as a simple kitchen update spearheaded by designer Tiffany LeBlanc turns into a redo of the entire house. The ups and downs of renovation prove to be a challenge for everyone, especially when it comes to the ever-mounting costs. And with Debbie acting as the project's general contractor, she faces a steep learing curve in the world of construction. But after many months of dust and demo, they come out with a beautiful home for themselves and their family.
See Tune-In Times 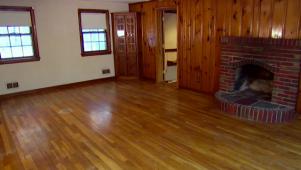 A Young Family Buys a Fixer and Transforms the Outdated Kitchen into Their Dream Space.