It’s been clear from the beginning that she and her British beau were on the road to happily-ever-after — and we’re thrilled for them.

The marriage of Christina El Moussa and Ant Anstead is wonderful news, and it comes as no surprise to anyone who’s seen their Instagram feeds or heard them talk about one another: they’ve been practically glowing with happiness since their meeting in autumn of 2017.

Their courtship spans continents and has even involved a royal (in a post congratulating Prince Harry and Meghan Markle on their marriage, Ant revealed that he’d texted Harry “asking for tips on dating a Yank”). Glamour aside, it’s also a very simple tale of two people deciding to take another chance on love. Here’s what happened when Christina met Ant...

For Christina, 2017 was all about figuring out what life looked like after the end of her marriage to Tarek El Moussa. As she explained to People, “a lot of people were thinking, ‘What’s going to happen?’ Tarek and I were so tied together on everything: real estate, ['Flip or Flop'], our children, our house. It was so stressful, and everyone was worried it was going to explode.”

Instead, everyone emerged stronger than ever—which meant that it was time to begin a new story. “I thought of 2017 like a rebuild,” Christina said. “So I’m starting from scratch.”

On New Year’s Eve, she dropped a hint about starting something new...

...and on New Year’s Day 2018, she was beaming on a bicycle beside Ant Anstead, a former UK police officer, semi-pro soccer player and TV auto expert (he’s co-hosted For the Love of Cars, Building Cars Live and Wheeler Dealers). Mutual friends had introduced her to the dreamy Brit back in October, and the rest, as they say, was history — or as Christina called it on a post for Ant’s 39th birthday, fate.

Turns out he’d posted a salute to new beginnings last year, too.

As she told People a few months later, “I can see myself getting married to him.” So could we, Christina, and now look! *smiles*

Ant lost no time in introducing Christina to a few of his favorite things on the other side of the Atlantic. In March of 2018, she got a personal tour of “[his] world”—complete with picture-perfect transportation, of course (since he’s the ultimate car guy).

The footloose couple traded their luxury wheels for a dusty safari Jeep during a visit to Sir Richard Branson’s Ulusaba Private Game Reserve in South Africa.

In May, Christina and Ant headed down to Cabo San Lucas — hey, if Christina’s going to explore all of England with her beau, it’s only fair that Ant should check out all of California, Baja included. Poor guy — it’s clearly a rough job.

Ant then joined Christina in Los Angeles to celebrate Prince Harry and Meghan Markle’s royal wedding. It was a gorgeous day (and an excellent bit of foreshadowing), but Christina, where’s your giant hat?!

In July, Christina and Ant were at each other’s sides back in the UK for the Silverstone Classic, a three-day racing event at the home of the British Grand Prix. Their companions: His daughter, Amelie, and son, Archie. Ant makes note of #jetlag, but all we see is four glorious smiles.

As Christina told Country Living in May, “[Ant and I] have a very similar job so we understand each other’s work hours and everything that goes into that.”

He also offers unconditional support for her professional relationship with Tarek: “The fact that [Ant] totally understands is awesome,” she said. “It’s amazing actually that [Tarek and I] are able to work together and he’s been nothing but supportive.” As Ant put it in an Instagram comment, “What truly inspiring professionals [Christina and Tarek] both are! Hats off to them.”

In June, Christina gave Ant a Father’s Day-inspired Instagram shoutout for his book, Cops and Robbers: The History of the British Police Car...

...and Ant was bursting with pride when news of Christina’s HGTV solo show — Christina on the Coast, which is expected to debut in 2019 — hit the airwaves.

When Christina (and her daughter, Taylor, and son, Brayden) made the cover of People a few weeks later, we suspect a few (hundred) copies made it out to the UK.

In August, Christina and Ant took all four of their children on a magical trip to Hawaii. As Ant put it, their broods are a “chaotic bunch of legends...what a lucky chap I am[.]”

The trip wasn’t entirely without drama, as an impending hurricane and a medical emergency intervened as they were headed home — but Ant, ever the gentleman, insisted that Christina, Taylor and Brayden take the first tickets back to the mainland. He called the ordeal character-building, and noted that for the kids, “it’s an ADVENTURE.”

It’s impossible to say where this brood will pop up next...

...but we know they’ll be beaming with love when they get there. As Ant said on their one-year anniversary, “[W]e have seen a ton of sunsets, drunk a fair amount of champagne and had some of the most jaw dropping weirdest moments that [make] me believe in fate! Our blended family just CLICK!”

As Christina put it in her post, “I love this life with you.” Their next adventure is just beginning. 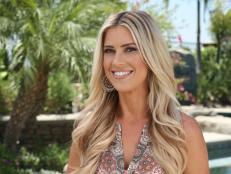 The Flip or Flop star's new show, Christina on the Coast, will premiere on HGTV in early 2019.